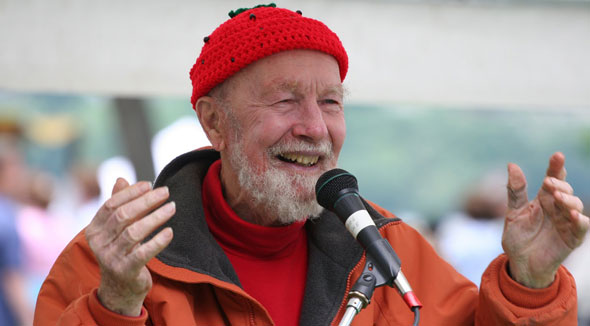 “He’s had one of the most perfect lives of anybody I know.”

That was filmmaker Jim Brown’s response when asked why he profiled Pete Seeger in a PBS “American Masters” documentary. Few would disagree with Brown’s assessment. In a career that’s spanned over 70 years, the 94-year-old Seeger has embodied the idealism that once defined the American spirit. A tireless crusader for social justice, world harmony and environmental causes, Seeger was even called, at the height of his activism, “America’s tuning fork.”

The trajectory of Seeger’s life is dazzling. Born May 3, 1919, he first wanted to become a journalist. Music beckoned, however, and following a period where he assisted folk-song archivist Alan Lomax, he teamed with legendary songwriter Woody Guthrie to form the politically oriented Almanac Singers. Drafted into the Army in 1942, Seeger served out his duty and then co-founded the folk group, the Weavers. In addition to popularizing the Guthrie classic “This Land Is Your Land,” the Weavers topped the charts in 1950 with their version of Leadbelly’s “Goodnight, Irene.”

Blacklisted during the McCarthy era, the Weavers disbanded in 1953. Informally banned from TV programs and radio shows—as well as from many concert stages—Seeger began performing at high schools and on college campuses. Concurrent with the folk revival of the early ’60s, his songs became better known to the public at large. Thanks to hit versions by the Kingston Trio, Peter, Paul & Mary, and the Byrds, the Seeger-written songs “If I Had a Hammer,” “Where Have All the Flowers Gone” and “Turn! Turn! Turn!” have become part of the American lexicon.

These days Seeger remains vibrant, creative and deeply attuned to social and environmental issues. He and his wife, Toshi, continue to live on a wooded hillside in New York overlooking the Hudson River, in a cabin they built with their own hands decades ago. Since 1969, Seeger has worked closely with the Clearwater organization, an environmental group that seeks to protect the Hudson River, its tributaries and related waters. Each year he invites more than 10,000 children and adults onto his sailboat, where they sing and discuss the history of the Hudson.

To celebrate his birthday today, here is Pete’s story behind his timeless “Where Have All the Flowers Gone.”

“I had been reading a long novel—”And Quiet Flows the Don”—about the Don River in Russia and the Cossacks who lived along it in the 19th century. It describes the Cossack soldiers galloping off to join the Czar’s army, singing as they go. Three lines from a song are quoted in the book: ‘Where are the flowers? The girls plucked them / Where are the girls? They’re all married / Where are the men? They’re all in the army.’ I never got around to looking up the song, but I wrote down those three lines.

“Later, in an airplane, I was dozing, and it occurred to me that the line ‘long time passing’—which I had also written in a notebook—would sing well. Then I thought, ‘When will we ever learn.’ Suddenly, within 20 minutes, I had a song. There were just three verses. I Scotch-taped the song to a microphone and sang it at Oberlin College. This was in 1955.

“One of the students there had a summer job as a camp counselor. He took the song to the camp and sang it to the kids. It was very short. He gave it rhythm, which I hadn’t done. The kids played around with it, singing ‘Where have all the counselors gone? / Open curfew, everyone.’

Category: In Case You Haven’t Heard

Heres How to Watch Harry Potter

Where is Madam Nazar Today in Red Dead Online 2