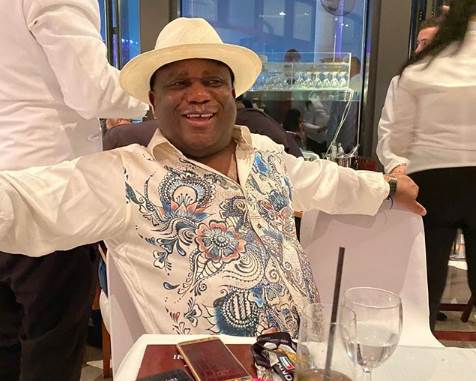 Since he resurfaced online, he has gone back to his old ways where he flaunts his flamboyant cars and posts live videos of himself counting huge piles of money.

In this article, we want to look at the life and biography of Terry Waya. We are even going to taking a close look at his business, family, controversies, and even Mr. Terry Waya’s Net Worth.

Before we match on, Who Is Chief Terry Waya,?

Terry Waya is a Nigerian businessman and celebrity that resides in London with his family. He is a very popular socialite that is known across the nation for flaunting his acquired wealth online.

He hails from the TIV cultural group found exclusively in Benue State, Nigeria. Born on the 23rd of August 1965, Terry Waya is a 55-year-old businessman. He is the father of Kiddwaya and Tersoo Waya.

Terry Waya was married to Susan Waya and their marriage led to the birth of two sons, Kiddwaya and Tersoo Waya.

He was born in a small village in Benue State before he moved to Kaduna to complete a small business deal with Northern traders. After that, he relocated to Abuja, where he got in contact with a lot of politicians, expanded his businesses, and became richer.

He completed his tertiary education in Kaduna Polytechnic and moved on to build his own company, Transcorp Hilton in 1992. The company had assets in different sectors including real estate, hospitality, oil, and gas.

Mr. Waya claims to be a businessman, consultant, lobbyist, and billionaire. Terry Waya is a wealthy businessman that is popular for his love for Italian designers especially Versace.

Unlike Hushpuppi that appreciates Gucci Wears, Terry Waya is a big fan of Versace Designers.

He even used to be called Mr. Versace because an the time he goes shopping, he enters a shopping spree for Versace clothes, accessories, and attires.

During his 40th birthday party in London, more than 40 prominent Nigerian politicians were spotted celebrating with him.

There’s no doubt that this multi-millionaire lives a very flamboyant lifestyle. It has been said that Mr. Terry Waya has properties across Europe, The UK, and the United States.

It’s safe to say that Mr. Terry Waya may be a key player in the Nigerian shadow government known as the Cabal. Mr. Waya lives a very secretive life.

He is very well respected by prominent Nigerian politicians and has power in his voice.

In 2005, Terry Waya was arrested in his London residence for suspected money laundering. He was however granted bail shortly after the arrest and the whole matter was swept under the rug.

During the BB Naija Lockdown reality TV show, KiddWaya even bragged about his net worth once. He told Erica that he just keeps quiet about most of the actions that occur within the house because his Net Worth is far above anything BB Naija has to offer him.

Mr. Waya’s wealth was first revealed when a rookie journalist visited his Abuja home and shared photos of the beautiful mansion on the morning news.

After that, He acquired immense fame in the country and was even investigated by the EFCC and other intelligent agencies in England for financial crimes.

Despite his secretive life, Mr. Waya was among the Advisory council of All Progressives Congress (APC) Women and Youths in the 2019 Presidential elections. This means that Mr. Waya is even close friends with president Buhari.

You can always get in touch with Mr. Terry Waya via his Instagram handle is @TerryWaya.

At the moment, Mr. Terry Waya has a net worth estimated to be over $360 million. He doesn’t just have an offshore business, Mr. Terry Waya happens to be friends with some of the most powerful politicians in the nation.

On several occasions, Mr. Terri Waya has share live videos of his multimillion Naira mansion and its mouth gaping contents. The 55-year-old billionaire always shares pictures and videos of his mansion with the interior designed like it was owned by Versace.

Even KiddWaya confirmed his father’s wealth on several occasions in the BBN reality TV shows. Around 2006, Mr. Terri Waya paid a £500,000 bail of former Bayelsa State, Governor Diepreye Alamesiegha when he was arrested and detained in London.

His massive net worth has allowed him to stay at home and enjoy the world, touring beautiful cities, and spending huge amounts of money on expensive cars.

For a man that claims to run a successful business, Mr. Waya has taken measures to ensure that the interesting details of his business are kept a secret.

Terry Waya is super popular for showing off the money he has acquired over the years on social media.

He even claims that the only water that satisfies him is St. Olive’s bottled water that is imported from Paris, France.